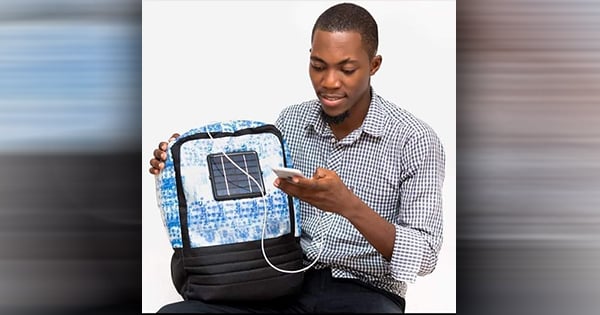 When you find yourself in the middle of nowhere, without a phone or a way to read to find your way? What does that inspire you to do? Meet Mike Bellot, the CEO, and Co-Founder of Solo Bag – an innovative school backpack that provides light for reading and power for charging mobile phones and tablets.

The uniqueness of this product cuts across all cultures. The backpack was cleverly designed with a built-in solar panel to help students in third world countries who have little to no reliable access to electricity.

Bellot, who is 26-years old and is from Haiti, completed his program in global politics and international trade in Taiwan. Bellot says he was inspired to invent the bag when his cousin tragically died from a fire in Haiti. His cousin, who aspired to be a doctor, had been studying late at night when the candle he was using caused a fire in his house and sadly he became trapped inside.

After the tragic incident, Bellot became determined to create a solution that would be safer, cost-effective, and accessible – not only to Haitians – but also to the other 1.2 billion people around the world who do not have access to electricity, according to the International Energy Agency in 2016.

Solo Bag, which was created with the help of Mike’s friend, Torcel Wendianne, is embedded with a solar panel that absorbs energy that is stored in a battery bank. It powers the LED lamp installed in the bag, and it’s enough power to safely illuminate a room for up to 6 hours – plenty of time for students to do their homework at night. The bag also comes with a USB port where mobile phones and other electronic devices can be charged and a GPS tracker in case they are lost.

Forbes Magazine says that Bellot is among the 10 most prolific Haitian entrepreneurs reinventing Haiti’s narrative. He was also one of the 100 winners of Meaningful Business in 2020 and was named “The Most Outstanding Young Person of the Year 2019” by the young International Chamber (JCI-Haiti).

The Ultimate List of Black-Owned Business Grant Opportunities in 2021

Grants for Filmmakers for the Production of Short Movies

How to Promote your Business Using the Power of Social Media